AIFF Media
Seasoned contestants Kickstart FC will face off Maharashtra-based side PIFA Sports FC tomorrow, April 15, 2022, who will mark their debut in the fifth edition of the Hero Indian Women’s League (HIWL).
The Kickstart gaffer Amrutha Aravind Valliyath sounded quite calm and confident ahead of their first game of the season.
Aravind clearly voiced their wish to fight for the championship, “Preparations are almost done for this year's title. We have a balanced side, and we will do our best for this year's championship”.
When asked about their game plan against PIFA the head coach said, “We are looking for an attacking style of play and we want a positive result”.
The Karnataka league champions eyes to “take each game as a challenge” and work as “one team one dream".
The game will kick off at 3:30 pm (IST) at the Capital Stadium, Odisha and the match will be live streamed on the Indian Football YouTube page. 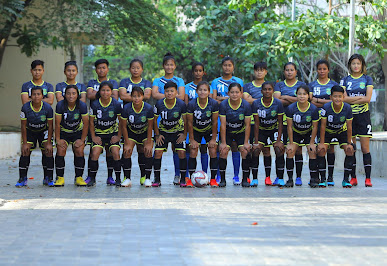 Posted by diegostrikes at 11:18 PM