St. Joseph's Boys' High School (SJBHS) defeated Greenwood High, Sarjapur 3-2 to win the Council for The Indian School Certificate Examinations (CISCE) Pre-Subroto Cup, Karnataka region. They will go on to play the final round of CISCE U-17 Pre-Subroto Cup scheduled in Kolkata late next month.

SJBHS hosted the event, which was played by 14 CISCE schools across the state (Chikmagalur, Bhatkal, Bengaluru) from June 21 to 28 at the Bangalore Football Stadium.

In the keenly contested final, Greenwood took an early lead via Noel Savio John (1’) and Animesh Nandi (9’). Ajay Arjun reduced the margin in the added time in first half. SJBHS came back strongly in the later half, Liyan Thanveer scored the equalizer, and the winner for SJBHS came from Goutham Paul. 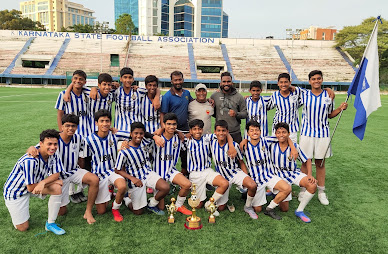 Posted by diegostrikes at 10:50 PM