Newly appointed Blues’ Head of Youth Development Jan van Loon will lead the Bengaluru FC ‘B’ side set to take part in the Puttaiah Memorial Cup, scheduled to take place in two Zones, the club announced on Tuesday.

Bengaluru FC B will face Kodagu FC in their opening encounter on Thursday, August 11th, with matches scheduled to take place at the Bangalore Football Stadium, in Ashok Nagar.

“The Puttaiah Memorial Cup has always been a special trophy for the club and we look forward to giving our best in order to bring the trophy home. The boys have been training well and I can’t wait to see them showcase what we’ve been working on in the tournament,” said Van Loon, ahead of his side’s opening match.

The squad features new signings Clarence Fernandes, Felixson Fernandes and Ankith P, who also featured in the Premier League NextGen Cup that was held in the UK, late last month. Karnataka’s own Sudheer Kotikala will also feature in Jan van Loon’s side in the Puttaiah Memorial Cup. The Blue Colts’ defender Robin Yadav will captain the Blue Colts for the tournament.

“We’ve been tracking the progress of the boys in training, and things are looking very positive. They’re working hard as a team and everyone is fighting for a spot in the starting XI. This squad is a mix of young and experienced players, and we’re looking forward to seeing them working together,” said Kaizad Ambapardiwalla, Assistant Coach of Bengaluru FC B.

Following the opener against Kodagu FC, scheduled for 4 pm, the Blue Colts will face Roots FC on August 13th and Kickstart FC on August 15th. 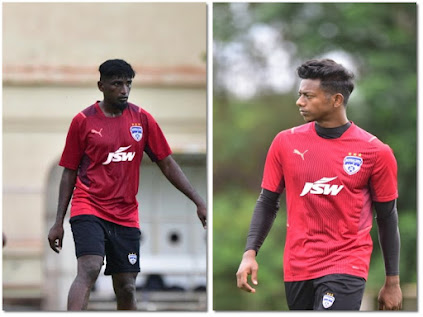 Posted by diegostrikes at 11:54 PM