New entrants to Bangalore top division, Roots FC, created an upset of sorts in the Puttaiah Memorial defeating tournament favorite Kickstart FC by a goal this afternoon at the Bangalore Football Stadium. Vishal R latched on to a deflection from the midfield, kept his composure, and placed it home. The goal came in the added time of first half when Kickstart were constantly pressurizing Roots’ defence.
Kickstart had a good 10-15 minutes in the beginning to test Roots’ defence, which looked shaky owing to the lack of experience in this occasion. Captain Nikhil, using his experience came to team’s rescue for few times.
Kickstart got the best chance to equalize in the early second half from a direct free-kick at the top of Roots FCs 18-yard box, but Shelton’s powerful kick found the woodwork. Despite keeping opposition under pressure, they failed to get the equalizer.
In another Zone B game played in the evening, Bengaluru FC boys trounced Kodagu FC 5-0. After two days (August 13), Kickstart FC will take on Kodagu FC and Bengaluru RC will play against Roots FC. 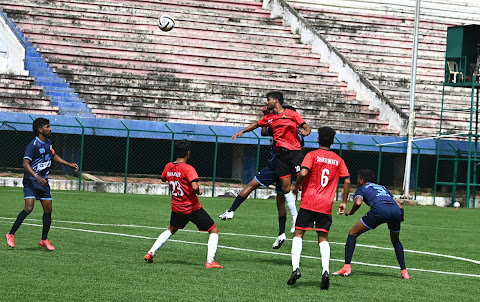 Posted by diegostrikes at 8:10 PM