Continuing good run, Nisilia Majaw scored her second hattrick in KWL, helping Misaka win over Pink Panthers 5-0. It was Simran Gurung who opened the account in the 7th minute and Nisilia scoring the second goal in first half. After changing ends, Tanvie made it 3-0 for Misaka thru a penalty kick.

Misaka have bagged 4 wins from as many games and are currently in the top along with Kickstart.

The game between Parikrma and Maatru Pratishtana ended in 1-1 draw. Parikrma girls were one-goal by in the first half, Keerthana equalized for Maatru at the beginning of second half.

Kemp FC Vs Roots FC game could not happen today. 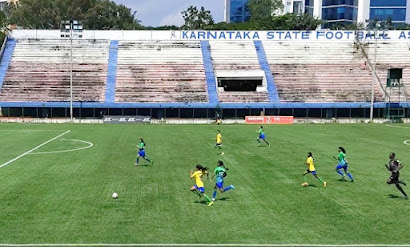 Posted by diegostrikes at 7:36 PM