FCBU score half a dozen against BUFC

Defending champions FC Bengaluru United (FCBU) stamped their authority on the ongoing BDFA Super Division tournament with a resounding 6-0 win over Bangalore United FC (BUFC) in their third game of the league. Jairo Rodrigues (15, 22 ), Irfan Yarwad (18), local boy Manoj Kannan (38), Selwyn Miranda (44), and Lalramzhuava Khiangte (85) were the goal-scorers for the two-time BDFA Super Division Champions as they rounded off a commanding performance.

FC Bengaluru United started aggressively and were soon on the attack creating a series of chances. Six minutes Aenam K Jyrwa made the most of a Jipson Justus pass to manage a great touch into the box but failed to find anyone to seal the deal. They continued to press on and soon enough were rewarded with their first goal. Irfan and Manvir Singh’s shots on goal were blocked leading to a corner for FC Bengaluru United. Manoj’s smart cross was neatly headed in by Jairo.

Three minutes later a cross from Manoj was headed by Jairo to Irfan who scored. Soon after, Manoj and Jairo once again combined to get FC Bengaluru United 3-0 up. A few minutes later, BUFC had their first real shot on target, which was expertly blocked by Jairo to keep them at bay. Manoj, who had played a key role in setting up the three goals, soon scored one of his own in the 38th minute – heading a corner from Manvir Singh into the top corner of the goal. Four minutes later, Selwyn Miranda struck to get FC Bengaluru United 5-0 up.

Both teams scrapped hard in the second half with FC Bengaluru United once again creating a few chances. Manvir tried a flamboyant bicycle kick off Nabin Rakha’s cross which headed over the bar, while a corner from Manoj was headed wide by Jairo. Bicycle kicks seemed to be the order of the day with Mohamad Kdouh trying one off a Chesterpaul cross, only to see it saved by the opposing goalkeeper. The 65th minute saw a good half chance from Manvir that narrowly went past the goal. A screaming freekick from Lalramzauva Khiangte crashed into the right corner of the goal as FC Bengaluru United was the perfect way to close an emphatic victory for the defending champions. 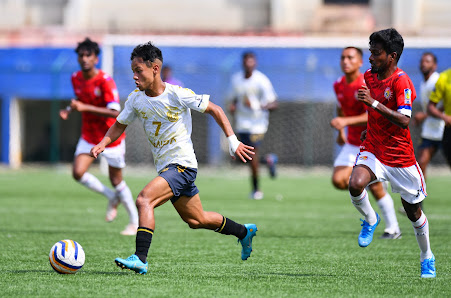 Posted by diegostrikes at 5:57 PM