Bengaluru FC announced their 30-man squad for the 2018 AFC Cup knock-out rounds, as Carles Cuadrat’s men gear up to take on Turkmenistan’s champions Altyn Asyr FK in the first leg of the inter-zone semifinal, at the Sree Kanteerava Stadium, on August 22.

The squad which returned from a two-week Spanish tour regrouped at the Bengaluru Football Stadium on Friday ahead of their big game next week. “We have returned from a very satisfying pre-season tour of Spain and it all builds up to two important AFC Cup games we will be playing in the span of a week. The boys have done everything we asked of them over the last one month. Now is about being competitive and giving our best shot in these games," said Cuadrat who is set to take charge for the first time in a competitive fixture for the Blues.

Bengaluru who clinched the South Zone title for the second successive season in dramatic fashion are up against Group-D champions Altyn Asyr, who in similar manner toppled last-year’s runners-up FC Istiklol Dushanbe from Tajikistan to seal their berth in the knockouts.

Miku, who netted a staggering twenty goals last season, was not named in the squads for the preliminary and play-off as well as the group stages of the competition, but is set to feature for Bengaluru FC on the continental stage for the first time. Joining him are Juanan Gonzalez and Erik Paartalu (Asian player) who have been the mainstay in the squad along with new signing Xisco Hernandez as the overseas players.

While Dimas Delgado misses out due to an injury sustained in Spain, Cuadrat is hopeful Xisco will provide the flair in his absence. “A muscle injury meant we had to take the tough decision of leaving Dimas out. Xisco, who replaces him, has some good qualities and provides a good option for us. He has been working hard during the pre-season and has blended in quickly,” added Cuadrat.

Keeping faith in youth, Cuadrat has also named thirteen boys from Bengaluru FC B – twelve of whom played in the 2nd Division League last season while six are graduates from the U18 side of the BFC Residential Academy. Four of those six featured for the club in the U18 Youth League last season as well, while the duo of Namgyal Bhutia and Naorem Roshan Singh plied trade for Indian Arrows in the I-League on loan from the Blues before returning for the 2nd Division League campaign. 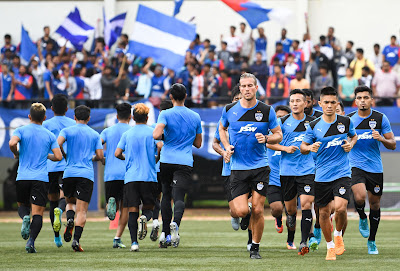 Posted by diegostrikes at 11:03 PM