Bengaluru FC down Ozone 2-1 in a thriller


Naushad Moosa’s young Bengaluru FC side came from a goal down to defeat Ozone FC 2-1 in a thrilling BDFA Super Division League encounter at the Bangalore Football Stadium, in Bengaluru, on Tuesday. Edmund Lalrindika’s 32nd minute equaliser cancelled out MS Jithin’s (2’) early opener for Ozone FC, before an own goal from defender Mark Anthony (76’) handed the Blue Colts all three points.
Going into this crucial game, Moosa opted to field an unchanged eleven from the win over Kickstart FC. However, the young Blues had a start to forget as they conceded inside the first two minutes.
Having lost the ball in the rival half, Bengaluru were hit hard by a quickfire counter attack by the rivals. Ozone attacker Jithin kept his composure to run solo and avoid Asheer Akthar’s tackle before beating Aditya Patra in the BFC goal with a left-footed finish from inside the box.
Having conceded just their second goal of the campaign, Bengaluru didn’t drop their heads and slowly found their groove. Their persistence finally paid dividends when striker Lalrindika pulled them level in the 32nd minute. The striker latched on to a lob from midfielder Biswa Darjee and fired home a half volley from the edge of the box to make it 1-1.
Winger Leon Augustine then looked to have beaten the offside trap and scored the goal that would’ve shot his side into the lead, only for a dubious decision from the linesman on the far side to rule his strike out for offside.
Bengaluru had back-to-back chances of their own inside two minutes of the second half as Leon Augustine, who combined well with substitute Lalnuntluanga, managed to beat his marker but his shot from close range was saved by the rival custodian. The resultant corner had skipper Myron Mendes’ header come off the crossbar after he met Altamash Sayed’s set-piece perfectly.
Bengaluru continued to push ahead and dominate the game which had turned physical and despite Ozone defending deep in their own half, the Blue Colts managed to break their defense down in the 76th minute, when left-back Parag dribbled his way through the Ozone backline with his resultant cut back turned into his own net by defender Mark Anthony.
With Ozone throwing bodies up front in the final quarter, Moosa’s boys managed hold on to their slender advantage to seal a fourth win in five games. The Blue Colts will now take on South United FC on Sunday, December 2. 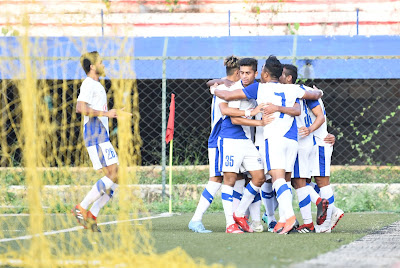 Posted by diegostrikes at 7:10 PM