Bengaluru FC were crowned Champions of the BDFA Super Division League in a glittering ceremony held at the Bangalore Football Stadium, on Sunday. The Blue Colts, who had sealed the title with a game to spare after their victory over ASC on December 27, were handed the prestigious George Hoover trophy for the first time in their six-year history.

The Blue Colts set a few records en route to their maiden title as they finished as the only team to win ten games. In fact, with 34 points in their kitty, they finished with a seven-point lead over second placed Ozone FC (27 pts from nine games). Bengaluru's tally of 46 goals scored was the highest this season and they also put an impressive defensive performance conceding just four goals in thirteen games, the least among all 14 teams in the Division.

Speaking on the historic occasion, Bengaluru FC’s Chief Technical Officer Mandar Tamhane said, “We came close on a couple of occasions in the past but’s a great achievement for the club to finally get over the line and claim this elusive trophy. The BDFA Super Division League has provided a great platform for our Colts to get valuable game time which was the idea behind forming the team last season. Their triumph in the Puttaiah Memorial Cup earlier in the season and the Super Division title now just shows how much progress the boys have made under Naushad Moosa and also attests our player pathway. The league has been improving every year and the experience that our boys had this season will definitely help them in the 2nd Division League campaign that begins this week.”

Coach Naushad Moosa was delighted with the triumph but also highlighted the hard work put in by the boys throughout the season. “It was a tough competition overall for us and the early loss against MEG was a wake-up call. It was important to get out of the relaxed mode and the boys immediately bounced back with a big win over Students Union and there was no looking back since then. We managed to rotate the squad throughout the competition and everyone who got a chance put in a great performance. This year the competition has provided us with the perfect preparation for the 2nd Division League which will be the real test for the boys.”

Bengaluru FC B travel to Goa on Tuesday, where they take on FC Goa Reserves in their opening match of the 2nd Division League, at the Nagoa Ground. 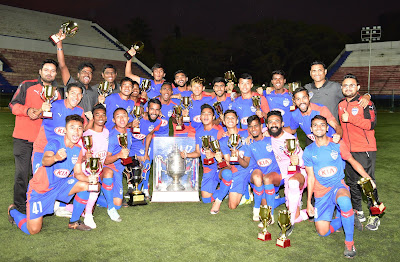