Bengaluru FC have completed the signing of Spanish striker Manuel Onwu Villafranca ahead of the 2019-20 season, the club announced on Wednesday.

The 31-year-old striker who becomes the 13th Spaniard to sign for the Blues, has put pen to paper on a one-year deal with the club having an option to extend it for another year.

“Having spent a fair bit of time playing in Spain, I was looking for a different experience. However, I wanted to join a strong project where we fight for ambitious goals. That's the reason I'm very excited to join Bengaluru FC. I've heard a lot of good things about the club from many Spanish players in the league, and that helped me make a decision about coming here. I look forward to meeting my new teammates and hope to help the club build on their success from last season,” said Manuel after putting to paper.

Welcoming him to the Blues fold, Coach Carles Cuadrat said, “Manuel comes in after a long playing career in Spain that includes playing at the very top. He will provide us with some good options in attack and we expect him to settle in easily. Of course, he isn't a direct replacement for Miku, because we're talking about two very different types of players. Manuel is a great professional, and his experiences will definitely make him a great addition to our squad.”

Born in Tudela, Manuel had youth spells with Club Atlético Valtierrano and CD Tudelano, making his senior debut with the latter in 2006. In 2007, Onwu signed with Osasuna B and had a couple of loan spells at CD Iruña (2007-08) and UD Alzira (2008) before returning to the reserve team of the La Liga side. While Manuel featured and netted regularly for Osasuna B in the Segunda B Division, he was called up to the first team and made his La Liga debut in March 2012.

Having played three seasons in the Spanish top flight and another one in the Segunda Division for Osasuna, Manuel had a brief spell in Georgia with FC Dinamo Tbilisi where he was part of the side that won the 2015 Georgian Cup. He returned to Spain the following season and featured for Lleida Esportiu (2015-16) and Lorca FC (2016-18) helping the latter to a promotion to Segunda Division in his first season. In January 2018, he moved to UCAM Murcia CF and featured regularly and in fact, was the top-scorer for the Universitarios with 11 league goals in the 2018-19 season. 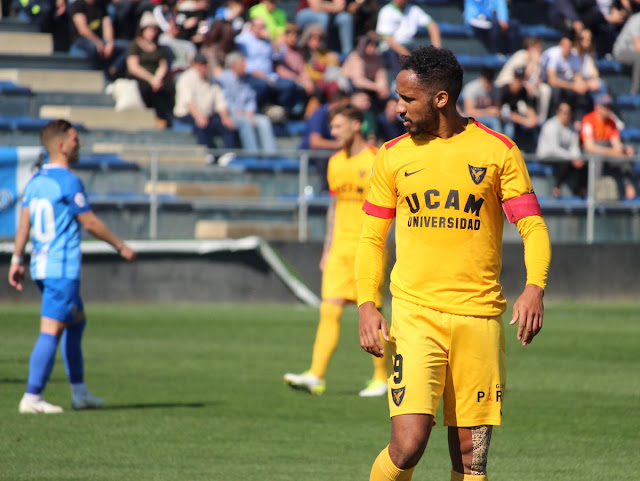 Posted by diegostrikes at 11:07 PM