DE Ethiraj, member of the Indian national football team that won the gold medal in 1962 Asian Games at Jakarta, Indonesia passed away at his residence today at Jogupalye, Bengaluru.
Ethiraj was employed with Madras Engineering Group (MEG) and played for them in local football. MEG used to be a very strong and polular teams in 60s and Ethiraj was a formidable striker of the team. Before earning a national call, he represented Services in Santosh Trophy, and continued playing in Services colors for many years.
Ethiraj hailed from city's footballing pocket Ulsoor. His teammate of 1962 Asian Games, football legend Arumainayagam, too come from the same locality.
His burial will take place today 3 pm at Laksmi Puram Burial Ground, Ulsoor. 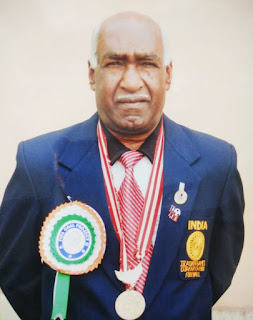 Posted by diegostrikes at 10:21 AM