Bengaluru FC Media
In what holds the promise of an engrossing contest between two sides in form, Bengaluru FC will square off against ATK Mohun Bagan, spurred by the prospect of leap-frogging the current champions on the table should they triumph at the Fatorda Stadium, in Goa, on Monday.
Carles Cuadrat’s side are third on points, one below ATK Mohun Bagan, and the Spaniard admits the chance to climb the table at the expense of the Kolkata side will serve as motivation for his boys. However, he mentioned that there were a few other factors that will play a role in the build-up to the clash. “There’s more than just one motivating factor as we get ready to play ATKMB. They are the team that put us out in the semifinal last season. They are also a team that will fight for the AFC Champions League and AFC Cup slots. That aside, just the one point separates us. So, it’s good to come up against them at this stage, in what I am sure will be a very difficult challenge.”
ATKMB, with Antonio Habas at the helm, got their season off to a perfect start, picking up nine points from their first three games before Jamshedpur dented their run with a 2-1 win over the champions. ATKMB then went on to draw against Hyderabad, before nicking three more points against Goa, to sit in second position on the table.
Bengaluru, meanwhile, have been picking momentum with three wins in their last four games, and along with Hyderabad, are one of the only two sides to yet taste defeat this season. However, Cuadarat is aware of what Bengaluru will be up against on Monday.
“ATK Mohun Bagan pose a very physical challenge, they have a team with very tough players. We know about them; they have a few big bodies and play with a high tempo. We saw in their game against FC Goa how their players played as a compact unit and tried to take advantage of counter-attacks and open spaces.”
The game will be Bengaluru’s fifth in a three week period and Cuadrat hinted at the possibility of a few changes to the Bengaluru side that starts the game. “We have had five games in about 21 days so we also have to get some fresh legs on the pitch. The team is fit and well, but we will have to rotate. We will try to use players who have played fewer minutes in the season so far. We also have to understand that it has been tough for the players since the first game of the season,” said Cuadrat.
Roy Krishna has been in top form for ATKMB with five goals in six games while on the other side, Cleiton Silva and Sunil Chhetri have three goals each against their name. However, Cuadrat foresees a very tight game where the defences of both teams will call the shots. “ATKMB were the champions for a reason. They know how to defend and how to be dangerous in their attacks. That's what we have to try and avoid on Monday. We have to create enough chances to score because they are very good defensively, they have conceded the fewest goals so far. They employ a very good defensive structure and we will try to beat them.
“It is going to be that kind of game again, where two compact teams go head-to-head and not a lot of things will happen in attack. The defenders will be in control of the situations and it will be little details that will decide the outcome,” Said Cuadrat.
Earlier on Sunday, the club put out an update on Ashique Kuruniyan who had suffered multiple fractures to his face after a collision during the win over Odisha FC, saying he had undergone a successful surgery in Bengaluru and that his condition would be closely monitored over the coming days.
Kick off between the Blues and ATK Mohun Bagan is scheduled for 7.30 pm on Monday, and will be telecast live on the STAR Sports Network, Hotstar and Jio TV. 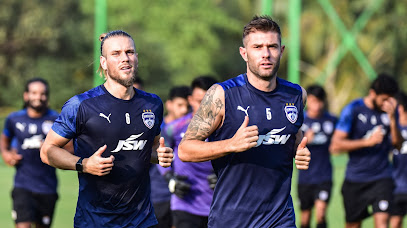 Posted by diegostrikes at 1:13 PM