The Karnataka State football Association's Youth Premier League kicks off today with competitions in the Under-17 and Under-14 categories. While In last year's Inaugural edition ten academies took part in the Under-13 and Under-15 category, this year KSFA have provided five categories for the kids to play In - Under- 17, Under-14, Under-12, Under-10, and Under 8.

KSFA have organized COVID 19 RT-PCR tests free of cost at the Bangalore Football Stadium for the players, coaches and have made It mandatory before the competition.

The Under-12, Under-10 and Under-8 competitions will be held two weeks later.

Participating teams
Under 17
Under 14 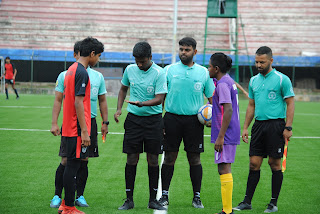 Posted by diegostrikes at 6:07 PM