In what was a fitting finale to an incredible campaign, FC Bengaluru United were crowned Citrus Ventures BDFA Super Division 2021 champions after they beat FC Deccan 1-0 in their twelfth and final match of the league. With the most number of goals scored in the tournament thus far and a nine-game-unbeaten run that underlined their performance, FC Bengaluru United were clearly the best team right through and sealing the championship was the perfect ending to this stellar run.

Before this game, FC Bengaluru United were one point ahead of second placed Bengaluru FC, having beaten them 3-2 in the game on 8th March. This win gives them an unassailable 4-point lead, even though Bengaluru FC still have a game to play.

With Deccan FC at eighth on the points table, it was expected that FC Bengaluru United would be able to put it past them, but with the sun beating down, the going was hard for both teams. FC Bengaluru United took a while to get into the attacking groove – their first attacking shot on the goal came via a long range freekick from Ronaldo in the 15thminute that just sailed over the bar. Deccan FC, with five men at the back, were focused more on defending resolutely, their only real chance coming in the 40th minute, via a cross, which was dealt with the FC Bengaluru United defence.

With both teams yet to open their account at half-time, FC Bengaluru United made two attacking substitutions – Stendly and Chaitan coming in for Anup and Vignesh - as they looked to up the ante. And the decision soon bore fruit. Following a few attacking and counter attacking plays, Stendly’s precise long range cross in the 62nd minute was neatly put away by Robert Primus to give FC Bengaluru United the all-important lead.

Having snuck in front and the championship in sight, FC Bengaluru United continued to keep up the pressure. Naro came on for Daniel and was soon in the thick of things – a couple of shots narrowly missing the goal with minutes to go. One more chance, beautifully set up by Asraf and Naro for Malem, just overshot the bar. In the 89thminute, with one minute of full time and four minutes of extra to go, FC Bengaluru United decided to strengthen the defence in a bid to ensure they didn’t lose the lead bringing in wingback Ronald for Robin. No last-minute twists in extra time, unlike the game against BFC. The final scoreline - 1-0 in favour of FC Bengaluru United, the new BDFA Super Division Champions! 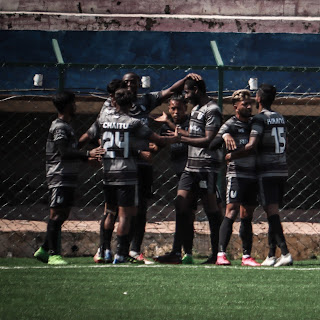 Posted by diegostrikes at 9:36 PM