Bengaluru FC Media
Bengaluru FC girls picked up their second win of the KSFA Women’s ‘A’ Division League campaign with a 3-0 win over PASS FC at the Bangalore Football Stadium. Goals from Chinmayi Tili (6’). Nandini (15’) and Ruthu (65’) were enough to see BFC cruise to victory.
The Blues started the game brightly under the lights and scored with their first shot on target, inside five minutes. Shloka Krishna dragged the defenders wide and then played the ball through to Chinmayi, who slotted past Bhoomika in the PASS goal to make it 1-0.
The young winger continued to be a threat down the left flank and won a penalty for the Blues after her cross clipped the arm of a Pass FC defender only ten minutes later. Nandini stepped up and scored her fourth goal of the tournament and made it 2-0 in the first 15 minutes.
Bengaluru FC continued to use the flanks to their advantage and kept creating chances through the wings with Chinmayi and Annika Srivastava.
Into the second period, Bengaluru pushed forward in a bid to add to their tally but attempts from Nandini and Tanvi failed to find the target. Shloka had a chance to add her name to the scoresheet, but the striker was unable to apply the finish to a cross from Nandini.
Levanah Samuel’s side found their third goal just past the hour mark when a defensive lapse allowed Sanjana Makam to drive a cross into a dangerous area. Bhoomika’s spill fell to Ruthu Sreenandan, who finished from close range to make it 3-0.
PASS FC made inroads late in the game, but the Bengaluru defence did well to cut away the danger while Karnika Karthick stood stubborn in goal to make a series of fine saves. 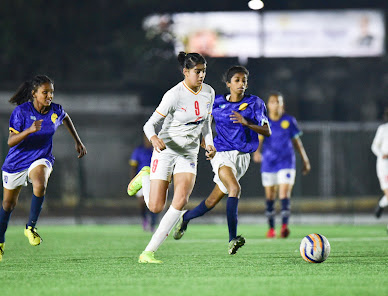 Posted by diegostrikes at 10:28 PM