Football great Papanna, of the famous Papanna, Rajanna, and Rammana brothers trio from Mysore passed away today morning 10 at his residence in Mysore. He was 78 years old and is survived by his wife.

The three brothers formed a formidable force in the country’s football circle. His elder brother Ramanna died in Kolkata almost six years ago, in 2016.

After shinning for Dalvoy Middle School, earned a call to represent the then Mysore State in Junior Nationals, then he graduated to the senior team that played in Santosh trophy, and moved to the Mecca of Football, Kolkata, and played with much success for Mohammedan Sporting.

Kolkata Maidan Folklore has it that while watching them turning out for their favorite team, the Mohammedan Sporting supporters would chant:
Shawan ka mahina, Mohammedan kare shor, Ramanna kare center, Papanna kare goal.

Papanna represented India in Merdeka Cup at Kualaumpur, Malaysia and scored a goal against Japan.

Known for his proficiency in scoring goals from headers, Papanna scored a record 20-goals for his club Mohammedan and helped to lift the Calcutta Football League title in 1966. He was a part of the IFA Shield winning team for the same club and played all major national tournaments like Durand, Rovers Cup, DCM Trophy, so on.

When Papanna moved back to his home state, he turned up for ITI Bengaluru, Ideal Jawa Factory and KR Mills in Mysore.

KSFA and BDFA condoled the demise of the great son of the state. 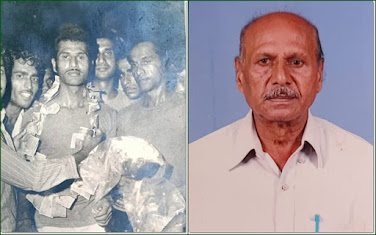 Posted by diegostrikes at 7:48 PM