Bengaluru FC Media
Simon Grayson’s Bengaluru FC side ran away 4-0 winners against Indian Air Force FT at the Kishore Bharati Krirangan, in Kolkata, on Tuesday, climbing to joint-top of Group A in the 2022 Durand Cup in the process, level on points with Mohammedan SC. Goals from Roy Krishna and Sunil Chhetri gave the Blues a 2-0 lead heading into the break before substitutes Faisal Ali and Sivasakthi Narayanan added two more in the second period.
Grayson made six changes to the side that took on Jamshedpur FC in the opening encounter, handing starts to Sandesh Jhingan, Aleksandar Jovanovic and Krishna. Chhetri and Krishna started in attack for the Blues, who set up in a 3-5-2 formation.
Bengaluru started strong, making inroads from the get go and took only nine minutes to break the deadlock. A long diagonal from Jovanovic fell to Krishna, who brushed off his marker and finished past Shibin Raj in the IAF goal. Fifteen minutes later, Chhetri doubled the lead, converting a seemingly harmless cross into the area from the tightest of angles off an IAF defender.
IAF’s best chance of the half fell to Mohammed Aqib, but his shot from distance was parried away by Gurpreet. Into the second period, Bengaluru rang in a change as Jhingan was replaced by Udanta Singh. Prabir Das fell into the three-man backline as Udanta took his place.
Bengaluru continued to push forward, and made three more changes in quick succession past the hour mark as Faisal, Alan and Parag made their way on to replace Jovanovic, Muirang and Krishna. Only three minutes on from his introduction, Faisal wrote his name into the scoresheet, slotting in from close range after Wangjam had done well to keep the ball in play for Udanta.
Into extra-time, Bengaluru had another substitute on the scoresheet with Sivasakthi, who had replaced Chhetri just moments earlier, running onto a pass from Wangjam and slotting past Shibin Raj.
Bengaluru face FC Goa next, at the VYBK, on August 30th. 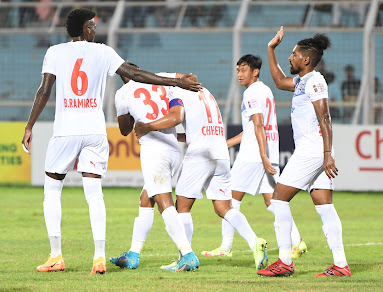 Posted by diegostrikes at 1:20 PM