State boys defeated Uttarakhand 3-1 without much diffuculty in their second game of 76th Santosh Trophy, National Football Championship for senior men played at Jawaharlal Nehru Stadium, Delhi yesterday. Karnataka is placed in Group 1, the other teams include host Delhi, Gujarat, Ladakh, and Tripura. After two straight wins, they are comfortably positioned at the top spot (6 pts) followed by Delhi  (4 pts).
Forward Jacob Jhon Kattookaren opened the account in 21st minute. Ajay Bisht of Uttarakhand equalized in the later stage of first half. Karnataka were quick enough to take lead in the added time of first half from a Shajan Franklin goal.
When the game almost looked to settle in with the same score, Ankith P, who replaced Jacob in the later half scored the third goal.
Karnataka play minnow Ladakh tomorrow, December 27, 11 am at the same venue. 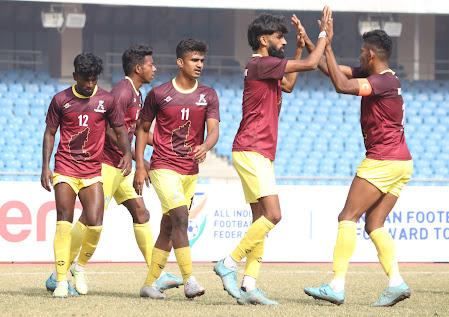 Posted by diegostrikes at 4:51 PM