Karnataka boys rallied back from a goal down to defeat Ladakh 3-2 in their third game of 76th Santosh Trophy played at Jawahar Nehru Stadium today morning. Ladakh, considered to be one of the weakest team in Group 1 is participating Santosh Trophy for the first time. Before taking on Karnataka today, they have gathered one point from two games.

What was considered to be an easy match didn't begin that way. The state boys were up for a rude shock when Ladakh opened the account early in the game. Mohmad Ilyas was the scorer for Ladakh. Karnataka gradually came back to the game and Abhishekh Powar equalized in the 27h minute. After changing ends, another striker Jacob John Kotookaren gave the much-needed lead. Defender Robin Yadav's 80th minute goal sealed the third win Karnataka.

Stanzin Gilik reduced the margin for Ladakh in the added time of second half.

Karnataka will play their next game against Tripura on Thursday, December 29. 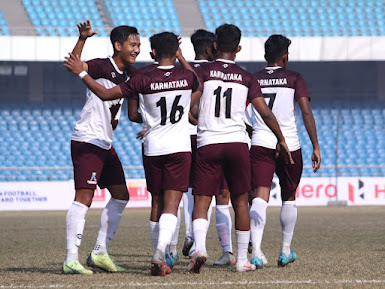 Posted by diegostrikes at 7:52 PM