I-League champions Bengaluru FC, on Thursday, announced the signing of defender Sandesh Jhingan on a season-long loan deal from Indian Super League side, Kerala Blasters FC. The 23-year-old becomes the Blues’ seventh signing, adding to their roster, and coach Albert Roca feels Jhingan’s introduction into the side will provide depth to an already formidable defensive line-up.

“In Jhingan, we have signed a player who can turn out as a central defender and provide cover in full-back positions. He is coming off the back of a very good ISL campaign and his introduction adds to a squad that will need his presence as we look to compete in both the I-League and the AFC competitions,” said Roca.

The towering Jhingan, who is known for his aerial prowess, started his career at United Sikkim in 2011 and moved to Mumbai FC before joining ISL side Kerala Blasters in 2014. The Indian international, who has turned out for the country on 12 occasions, then went on loan to Sporting Clube de Goa and most recently to DSK Shivajians in the previous edition of the I-League.

Asked about his shift to the Blues’ camp, the Chandigarh-born defender said he is elated to have joined the club and had no second thoughts about the move.

“It feels great to be here. Bengaluru FC are the champions and one of the best clubs in India right now, so it’s an honour to have been approached by them. I had no doubts in my mind and when the offer came about I just said yes,” he said.

Coming into a Blues side that won its opening game in the I-League, the defender maintains that his aim is to contribute towards winning Albert Roca’s first League campaign.

“Bengaluru FC are the champions, so to maintain the momentum and retain the top spot come the end of the season, is the main aim. What this club has is a complete and competitive squad, so for me personally, the aim is to fit in and help the team win matches,” Jhingan added. 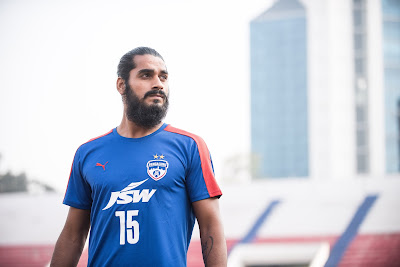 Posted by diegostrikes at 4:05 PM