FCBU Media
Little did Shreyas Ketkar know that a trip to a football ground in Bengaluru a little over a decade ago would transform his life forever. So drawn was he to the game of football that was being played that he decided to make the sport his own. Since then, Ketkar has taken massive strides on the football field. Today, the FC Bengaluru United midfielder is all set to practice with the India U-19 squad, as and when on ground training sessions resume.
Shreyas is undoubtedly "excited" at the opportunity and hopes this will be a step forward towards his ultimate goal. "I am very excited to train with the India U-19 squad, but my goal is to not only play for the India U-19 team but to definitely play for the Indian Senior Team one day. However, I have to take one step at a time. Hopefully, I can do well here and eventually move into the Senior Team. My immediate goal is to make it to the India U-19 squad for the U-19 AFC Cup in 2022." He got his first taste of the I-League (Senior Teams) when he played for FC Bengaluru United from October 2020 to January 2021. Shortly after playing for Bengaluru United in the second division last year, Ketkar impressed the selectors during the trials held by first division I-League team Indian Arrows and moved to the side on loan.
Shreyas is quick to acknowledge the role of the "coaches and staff and players" at FC Bengaluru United in helping him grow and learn as a player. "They [the coaches] gave a chance to everyone, even young players like me. We got a chance to play and compete in the second division. I learnt a lot about the game in a different way," says the 17-year old. "The training is very different at FCBU. It's intense and we have to be focused, disciplined and switched on all the time. It helps you to keep your focus. The coaches are always there to help, and the players can speak to them anytime about their games. One can go and have a chat with them about how to improve as a player," he added.
Shreyas has already achieved many milestones in his budding career. They include winning the Khelo India Youth Games in 2019 as Captain of the Karnataka team and being Karnataka State Captain for U-14, U-16 and U-17 sides. The young midfielder has seamlessly moved up the ranks of Indian football and now is all geared up for a crack at the international stage. 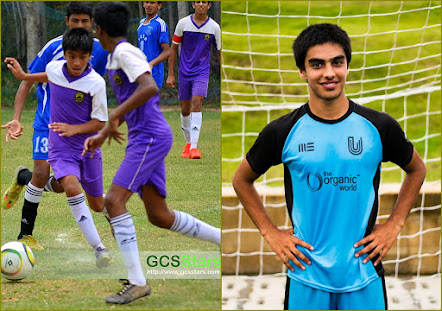 Posted by diegostrikes at 9:39 PM